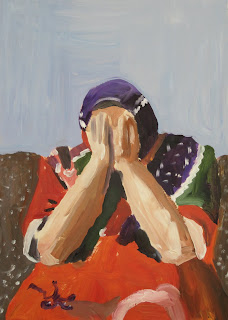 Mrs K was in terrible debt to a loan shark who took advantage of her plight. A muslim, and with a fear of her community finding out, she suffered in silence watching her debt go from £1,000 to £10,000 even though she only borrowed once. The loan shark was a 70 year old man in a wheelchair who was eventually convicted.
I’ve been looking at this image for a few weeks before I finally painted it. There was something uncomfortable about not seeing her face, but her sadness seemed to move towards me through her hands. I had a stronger essence of her because she had hidden her face. This has helped me to have a clearer focus of what type of images I want to work with. This woman’s struggle was part of the inspiration for the painting as well as the colours and composition, but primarily it was her struggle. So I’ve decided to make the theme of ‘struggle’ a focus for these quick paintings, and this can be interpreted in many ways as most humans struggle daily in one way or another. Health, money, relationships, disasters…the list goes on, but of course a positive outcome can be the result of a struggle so hopefully this will be a feature of the work too.