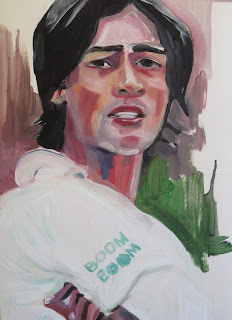 Mohammad Aamer, the 18 year old Pakistani fast-bowler implicated in deliberately playing no-balls in the fourth Test against England. He had just been named Pakistan’s man of the series, and now he is suspected of bringing shame to the game and to Pakistan. Blessed with good looks and talent obviously wasn’t enough for him and his greed has brought him disgrace and scandal.
For a painter his face offers a striking image full of energy and thought and this is the 2nd painting where I am engaging with the paint marks rather than focussing on the photographic details.