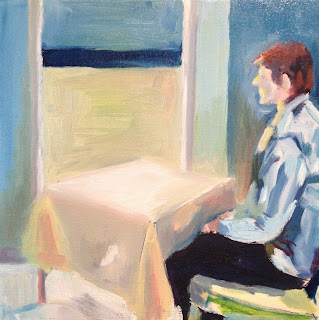 I haven’t been adding posts to my blog for quite a while and as I’ve been painting over the summer at The Makers Yard in Walthamstow, a studio I shared for a few months until we were forced out by the developers, I’ve got lots of catching up to do.
This painting began life a few years ago and originally there were two figures in the piece, I’ve recently revisited it. It’s a small painting, about 25cms x 25cms.